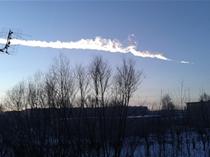 MOSCOW, Feb 15 (PRIME) -- Russia’s Federal Service for Communications, IT, and Mass Communication Oversight believes mobile networks affected by a meteor shower that occurred near the city of Chelyabinsk in the Urals area to be fully repaired by around 3.00 p.m. Moscow time, the regulator said in a statement on Twitter on Friday.

“The reason for the breakdown of some base stations belonging to (major mobile operator) MegaFon has been confirmed – it was the deterioration of the fiber optic lines,” the regulator said.

The watchdog also said that it launched an emergency roaming service for MegaFon’s subscribers in the Chelyabinsk Region.

Earlier on Friday, a spokesperson for MegaFon told RIA Novosti that about 15% of the operator’s base stations located in the region were damaged by meteorites.

“According to the preliminary data provided by the Emergency Situations Ministry, a meteorite may have caused electric power outages at some facilities and breakdowns of fiber optic networks,” the spokesperson said.

According to witnesses, at least three pieces of a meteorite fell in the Chelyabinsk Region on Friday morning. The explosive blast shattered the windows of many buildings and injured over 470 people, according to preliminary estimates.