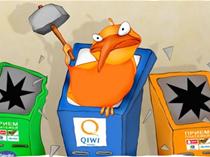 MOSCOW, Feb 11 (PRIME) -- The U.S.’ management company Waddell & Reed (W&R) bought a 5.26% stake in Qiwi Plc, the owner of Russian e-payment system Qiwi, in July–December 2013, according to a publication released by the U.S. Securities and Exchange Commission and seen by PRIME Tuesday.

In May 2013, Qiwi held an initial public offering (IPO) on NASDAQ with the price of U.S. $17 per share, which valued the entire company at $884 million. Qiwi’s shareholders managed to raise around $213 million during the IPO.

In the beginning of 2014, the price of Qiwi’s shares fell by around 20% after a group of deputies has submitted to the State Duma, the parliament’s lower house, a bill limiting the size of payments processed via an e-payment system without identifying the sender.

Qiwi’s stocks closed at $39.03 per papers on NASDAQ on Monday.