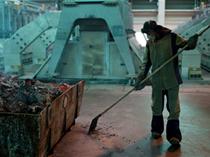 MOSCOW/KRASNOYARSK, Feb 20 (PRIME) -- A roof at the crushing department of Russian metals giant Norilsk Nickel’s concentrator collapsed, killing at least one worker and restricting company operations, representatives of the Emergency Ministry, the Prosecutor’s Office, and the Investigative Committee’s directorate in the Krasnoyarsk Region said on Saturday.

“According to the adjusted data, a total area of about 1,000 square meters collapsed. Emergency works are being done at the site in three shifts, and moments of silence are announced regularly,” an Emergency Ministry representative said.

A Prosecutor’s Office representative told PRIME that the roof collapsed during repairs.

“An overhaul to strengthen the structure were being done in the ore transshipment point. The overhaul was being done by LLC Norilsknickelremont. The Norilsk processing plant continues to work with restrictions related to emergency rescue operations,” the representative said.

Norilsk Nickel CEO Vladimir Potanin said that the collapse happened due to a serious violation of safety regulations and promised to invest around 100 billion rubles into industrial safety, Potanin said.

“According to preliminary data, this incident happened due to a gross violation of safety regulations and industrial safety standards by the management of the facility,” he said.

“An investigation is ongoing. The top executive of the facility that suffered from this accident has been dismissed from his position. An emergency center for liquidation of consequences and for provision of help to injured parties was created.”

This accident shows that Norilsk Nickel’s efforts to improve industrial safety are insufficient. The company will work even harder to improve safety and compliance with regulations to prevent similar accidents.

A source in the regional emergency services of the region told PRIME that the services had discovered the area where the missing people may be located, and were working on the way to uncover the debris and reach them safely.

The Investigative Committee of the Krasnoyarsk Region launched a criminal case over violation of safety regulations that led to the death of two or more people.