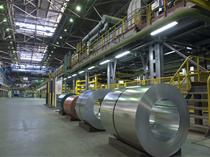 MOSCOW, Feb 10 (PRIME) -- Russian steelmaker NLMK plans to invest U.S. $1.6 billion in development until 2017 and expects additional income of $1 billion per year, the company said in its development strategy on Monday.

By 2017, the company plans to reach a net debt to EBITDA (earnings before interest, taxes, depreciation and amortization) ratio of 1.0. The company also plans to pay its shareholders at least 20% of the net profit under U.S. GAAP in dividends and keep an average payout of 30% within the next five years.