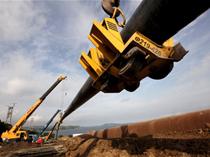 SOCHI, May 15 (PRIME) -- Moscow is ready to do whatever it can to build gas pipeline Nord Stream-2, President Vladimir Putin told Austrian President Alexander Van der Bellen, who said that Austria stays committed to the project, on Wednesday.

“We, on our part, are ready to complete this project at any cost. I think we will take it to the logical conclusion,” Putin said.

“Austria has no intent of quitting the project Nord Stream-2. OMV, this is an Austrian gas company, surely has no such intent. We have invested very much money in this alternative gas transit opportunity. Sure, we stay,” the Austrian president said.

The Nord Stream-2 project envisages construction of two lines of a natural gas pipeline with an annual capacity of up to 55 billion cubic meters, running from the Russian shore to Germany under the Baltic Sea. Gazprom is implementing the project together with Germany’s E.ON and BASF, Royal Dutch Shell, OMV, and France’s Engie. The length of the pipeline’s route exceeds 1,200 kilometers.

Media reported on Monday that the U.S. Senate is considering a bill threatening sanctions for the Russian pipeline.