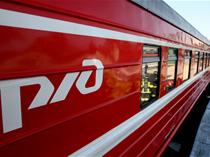 MOSCOW, Jul 31 (PRIME) -- The cargo loading of Russian Railways fell 5.2% on the year in April–June but started to recover over the last several weeks, CEO Oleg Belozyorov said at a meeting with Prime Minister Mikhail Mishustin on Friday.

"We have a small decline… not one we forecasted initially… the loading decreased by just 5.2% and we have registered some growth over the last several weeks," Belozyorov said, adding that in January–June, cargo loading fell 4.5% to 605.1 million tonnes.

The decrease of passenger traffic of Russian Railways has slowed down to 50%, Belozyorov also said.

"We have recovered to 65% in the suburban traffic and to about 50% in the long-distance traffic. A serious rise is registered literally every day," Belozyorov said.