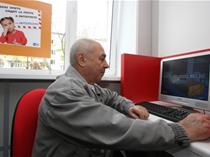 “I’m proud to present you Christofari. It’s the most powerful computer in Russia,” Rafalovsky said, adding that it is the main component of Sberbank’s AI cloud.

The computer was created in cooperation with U.S. company Nvidia and is on the seventh place by power in Europe and on the 29th in the world. It is named after the first client of Sberbank’s ancestor Sberkassa, Nikolai Kristofari.

Resources of the supercomputer will be available to the users of the bank’s cloud service SberCloud.

Sberbank CEO German Gref also said that the country’s market of cloud technologies is hugely underdeveloped and only 4% of firms use such solutions.

Head of autonomous non-commercial organization Digital Platforms Arseny Shcheltsin told PRIME, “The computer will enable Sberbank to make a great deal of complicated calculations and process a huge amount of user data online. It will make it possible to provide users with conceptually new services.”

The expert said cooperation of Sberbank with Nvidia started many years ago.

“In its turn, Nvidia is the leader in calculations for AI. Its computing architecture is installed almost on all supercomputers, from the first to the 30th place. At such a rate, Sberbank could try to create one of the most powerful supercomputers in the world,” Shcheltsin said.

“Without any doubt, creation of the supercomputer is a breakthrough for the Russian market of AI. Moreover, Russia has favorable conditions for further progress of the technology,” he said.