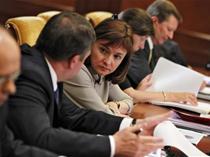 MOSCOW, May 22 (PRIME) -- The board of directors of the Russian central bank will consider reducing the key rate by 1 percentage point in June among other possibilities, Chairwoman Elvira Nabiullina said at a press conference on Friday.

"As disinflation tendencies dominate in the future, the Central Bank of Russia has room for further easing of the monetary policy," Nabiullina said. "A scenario of reduction by 1 percentage point is being considered, but the possibility is smaller than 100%."

She said that acceleration of price growth due to the ruble weakening has been exhausted.

"Concerning inflation, the price growth acceleration, which seems connected with the weakening of ruble and a temporary increase of demand for first-priority goods, is exhausted. Inflation was about zero last week and annual inflation was stable at a bit higher than 3% for the last two weeks," Nabiullina said.

Nabiullina said that duration of temporary pro-inflation factors turned out to be smaller than the central bank expected in April.

She said that the central bank can revise the 2020 inflation forecast in June. The peak of inflation in 2020 is expected in June–August and if there is no expansionary monetary policy, inflation can be below 4% in 2021 and 2022. The central bank is not considering a key rate below inflation.

The central bank does not rule out that Russia's gross domestic product (GDP) will fall by more than 8% in April–June and 4–6% in 2020.

"We made our forecast for the second quarter about a month ago and we indeed presumed 8% but we see now that some time in April… what indeed happened in the economy, met our expectations. The May dynamics is weaker and it is possible that the GDP will fall by more than 8% in the second quarter," Nabiullina said.

The central bank will adjust the macroeconomic forecast by the meeting of the board of directors in July, she said.

She also said that the retail loan portfolio of Russian banks decreased by 0.4% from May 1 until Tuesday. The central bank does not expect that non-payment of loans will become systemic, the official said.

Corporate deposits with banks rose by 0.3% in the period of May 1–Tuesday, retail deposits fell by 0.6%, she said.

Nabiullina separately said that interest of foreign investors to the Russian shares and bonds is gradually recovering. "The situation on the markets points to a decrease of risks to the financial stability," Nabiullina said.

The central bank sees room for Russia's state debt increase but this resource must be used only in an emergency, she said.

According to Nabiullina, the measures of direct people and business support are very popular and the central bank is monitoring them.

Nabiullina said that no changes of the budget spending rule were discussed. She advocated direct aid to the companies and people to no raise the volume of bad debt indirectly.