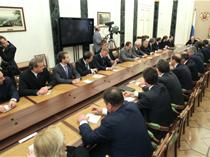 MOSCOW, Mar 26 (PRIME) -- The Russian government has to make all the decisions necessary to fulfill Wednesday’s orders of President Vladimir Putin to support people and businesses on Thursday, Prime Minister Mikhail Mishustin said at a government meeting.

“We have to make all decisions that are necessary to fulfill the president’s orders today,” Mishustin said.

Among the priority measures are reduction of insurance payments for small and medium-sized companies and provision of the right for these companies to delay tax payments. “We will do that immediately as soon as the bill is drafted,” he said.

He also ordered the Finance Ministry to amend all double taxation agreements with all countries in a month.

“Speaking of the money that are transferred to the offshores from our country in the form of dividend payments, I order the Finance Ministry to work out all double taxation agreements in a month, the tax on dividends for their withdrawal abroad should be collected at a rate of no less than 15%,” he said.

The bulk of reliable and responsible people understand the need to fight the virus, but there are people that don’t care about safety. “That is why we are introducing amendments to the Administrative Violations Code and sanctions on those who refuse to comply with the rules that we have set. We will fine people, officials, and companies as well for that,” he said.

The government also plans to allocate almost 105 billion rubles to start monthly payments to the families with children aging from three to seven a month earlier, in accordance with the Putin’s order.

“People were supposed to start receiving these payments in July, now we have to take care of it starting from June, a month earlier. We will allocate almost 105 billion rubles from the federal budget to this goal, and about 31.5 billion rubles more will come from the regional budgets,” Mishustin said.

Sergei Kalashnikov, first deputy chairman of the economic committee of the parliament’s upper chamber Federation Council, told PRIME that the tax on interest income and investment may come in force until the end of May.

“This is about 1% of Russians, and we all pay taxes on incomes from any profit. The yield on the deposits or investment is also a profit, so the proposal is reasonable…I suppose that the new tax may come in force already this spring, as the government and parliament won’t delay its approval,” he said.

But Anatoly Aksakov, chairman of the financial markets committee of the parliament’s lower chamber State Duma, said that the new taxes on interest income and dividends may be launched no earlier than in 2021.

“I understand these proposals. We will most likely pass them very fast, but the existing regulation stipulates that they should be introduced from 2021. This is about taxes, about introduction of new taxes that worsen the condition of taxpayers, they should be introduced starting from next year. Also, the dividend tax should pass coordination with the countries with which Russia signed double taxation agreements,” he said.