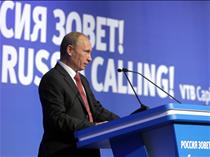 MOSCOW, Oct 29 (PRIME) -- Russia does not plan to launch a nationwide lockdown because of the spread of the coronavirus disease, and the government understands clearly what to do, President Vladimir Putin said on Thursday at the Russia Calling! investment forum organized by VTB Capital.

“We understand clearly how to operate. That is why we are not planning to introduce blanket restrictive measures and to launch a so-called nationwide lockdown with the economy and the businesses literally stopping,” he said.

The anti-coronavirus measures introduced by some cities and municipalities are reasonable to protect people, but there are no shutdowns of business operations, Putin also said.

“In this respect, I am asking the owners and managers of the companies to be socially responsible, adhere to all recommendations of doctors and other specialists considering working conditions for the staff,” he said.

The president said that the government has managed to maintain macroeconomic stability, avoid a spike of inflation, ensure stability of the financial market and that the steps taken to stem the spread of the pandemic have been effective and timely.

He said that the domestic economy will fall by around 4% in 2020 which is lower than in the other states.

Russia does not need quantitative easing, Putin said in answer to a question whether the central bank should act more actively in the current conditions and to use non-conventional tools in its policy.

“I cannot rule out anything, but now we do not need it,” he said.

The president said that Russia does not plan any adjustments to taxation of the energy industry either.

The government has spent 4.5% of gross domestic product (GDP) to fight against the pandemic and anti-crisis measures, including preservation of jobs and people’s incomes and placement of new orders to stimulate production chains, he also said, adding that the government is preparing new steps to support small and medium businesses.

Putin suggested prolongation of the tax and insurance payments delays for restaurants and other consumer services providers for three more months, and extension of the moratorium on scheduled checks of small businesses for the entire 2021.

Stimulation of investment activity is the government’s top priority short-term and long-term task, the president said, adding that growth of private internal investors is a sign of their trust in the financial system.

“You have asked whether we can increase spending. The answer is positive: Yes, we can… Support of the industries, the Russians, the families… Where is this money from? It comes from the reserve funds… Whether we should spend more (on investment) is an issue that needs thorough examination by the government, the central bank, I am watching it closely,” he said.

The president said that privatization of 180–186 state-owned joint stock companies and 86 unitary enterprises is planned for 2021, and 1,300 more companies will take part in the privatization program, and hoped that foreign investors will participate in privatization.

He also said that Russia does not plan to limit capital movement.

Putin said that Russian banks issued a record high of 3.5 trillion rubles of mortgage loans in 2020.