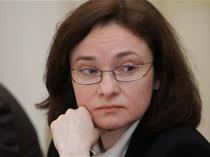 MOSCOW, Nov 18 (PRIME) -- The Russian central bank will not raise its 4% mid-term inflation target and will try to reach it at any costs, Chairwoman Elvira Nabiullina said at a meeting with the State Duma, parliament’s lower chamber, on Tuesday.

The central bank has been recently receiving proposals to raise the target to 6.0-6.5%, but it turns these suggestions down, she said.

The decision to float the ruble was not sudden, nor premature, Nabiullina said. “The introduction of a floating ruble rate requires a period of adaptation, we cannot let the rate go abruptly. The market has had a chance to adapt gradually.”

She said that any limits on foreign currency market speculations prescribed by legislation would be inefficient.

The central bank doubled its gold purchases in 2014 to 150 tonnes, the chairwoman said. “The share of gold in the foreign currency and gold reserves stands at about 10%. This year, we have been actively purchasing gold; we have already bought 150 tonnes of gold. Let me remind you that last year there were 80 tonnes,” Nabiullina said.

The central bank wants the government to give priority to imports replacement projects financed with the central bank’s new refinancing mechanism, which envisages loans for up to three years at an a key rate minus 1.5 percentage points, she said.