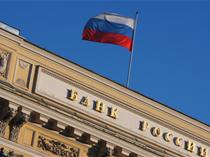 He said that banks earned 933 billion rubles in January–August, a large amount in the current circumstances.

"It is hard indeed to make any forecasts in conditions of rising uncertainty because of the pandemic. But if we manage to escape the second wave and new restrictions, I think, a profit of 1.2–1.3 trillion (rubles) is quite attainable at the end of the year, maybe even more," Danilov said.

Now there are about 40 small banks with constant losses, but the number of banks running at a loss can increase during the crisis -- 105 banks registered losses in January–August compared to 98 in the same period of 2019. "But do not be scared by this figure, they have a less than 3% share of assets in the sector and are very small banks," Danilov said.

The official said that 2–3% more of the total loan portfolio of Russian banks can become soured, with the ratio rising from 5.7% of the entire loan portfolio, or from 4.3 trillion rubles as of September 1, and the amount in monetary terms.

"It is important to understand that restructured loans are not in jeopardy, their quality is unknown so far," Danilov said.  He added that under an estimate by the banks, about 20% of restructured loans to individuals and small companies will end up troubled.

He warned of a possible risk of a mortgage market bubble, if a 6.5% lending program continues, Danilov said.

"There are no reasons for worry now. About 400 billion rubles of loans were given in the framework of the program as of the beginning of September, while the total limit is 900 billion rubles. This is not much because the entire mortgage portfolio of banks stands at about 8.5 trillion rubles," Danilov said.

He said that the program can cause a demand and price rise. After its finish, the prices will fall again but if another crisis hits, people's income will fall and credit risks will increase.

Deputy Finance Minister Alexei Moiseyev said earlier in 2020 that the cut-rate mortgage program subsidized by the government can cause a market bubble. The current 6.5% program, which is most popular, will end on November 1 and no decision to prolong it has been made.

The central bank sees no risks that Russians will withdraw money from deposits to other savings instruments but banks must prepare for competition not only between themselves, but with other types of financial organizations, the official said.

Danilov said that the central bank will hold a full-scale stress test of banks in 2021. In 2020, the stress test was carried out only for the 20 largest banks and was specifically targeted at the pandemic issues.