Home|Shop|RSS|Đóńńęčé
Home > All News > Our Features 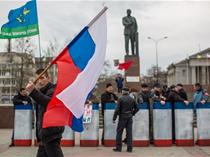 MOSCOW, Mar 31 (PRIME) -- The Russian authorities have repeatedly stated that Russian companies, including telecom operators, should enter the markets two new regions of the country – the republic of Crimea and the city of Sevastopol – as soon as possible. Most analysts believe that mobile operators are unlikely to gain big profits in the new territories, while wireline giant Rostelecom may be forced to build new wireline infrastructure on the Crimean peninsula. In addition, Kiev still regards Crimea as a part of Ukraine, which poses serious risks to the business of telecom companies.

On March 21, President Vladimir Putin signed a law to expand the number of Russian regions by two to 85 regions. The transitional period for the accession of the republic of Crimea and the city of Sevastopol to Russia will last until January 1, 2015.

Prime Minister Dmitry Medvedev instructed the government on March 24to help Rostelecom and its subsidiaries launch services in Crimea as soon as possible to ensure the security of the classified information.

Mobile services are now provided in Crimea by four operators:

- Kyivstar, which is affiliated with Russian mobile giant VimpelCom;

If these mobile operators want to continue operating in Crimea, they will have to be registered as Russian companies and receive a license, Vadim Ampelonsky, representative of the Federal Service for Communications, IT, and Mass Communication Oversight, told PRIME on March 25.

The Russian regulator will not force the operators to immediately stop their operations and withdraw their frequencies, Ampelonsky said.

“We will not oust any company (from Crimea) or take their radio frequency spectrum. Operators have an opportunity to get a status of a Russian company, receive a license, and continue to work. Our main task is to ensure uninterrupted communication services in Crimea,” Ampelonsky said.

Artyom Minayev, spokesman for Amsterdam-based VimpelCom Ltd., the owner of Russia’s VimpelCom and Ukraine’s Kyivstar, said that Kyivstar has yet to receive notifications from regulators and will continue to work in Crimea under the existing regulations, procedures, and licenses.

Spokesman for MTS Dmitry Solodovnikov said that MTS Ukraine will continue to provide communication services to their subscribers in Crimea without any limitation as long as it is technically possible.

Both Minayev and Solodovnikov declined to comment on whether Kyivstar and MTS Ukraine plan to register new companies under the Russian jurisdiction in Crimea.

However, Ampelonsky from the communications oversight regulator said that most of the licenses held by Russia’s MTS and VimpelCom, as well as their key competitor, mobile company MegaFon, and Rostelecom allow the operators to use frequencies across Russia. Therefore, these licenses will be valid in Crimea, he said, adding that the regulator will assign frequencies in Crimea to Russian operators taking into account the fact that local companies have already occupied a part of the spectrum.

"We need to understand, which of the frequencies… are now occupied,” Ampelonsky said. He also said that if Russian operators have licenses to the frequencies already used by the local players, the companies will have to find a compromise agreement in order to “avoid any conflicts.”

Ampelonsky did not specify the timeline, when the regulator may start providing licenses and assigning frequencies to Russian companies.

Earlier, the authorities of Crimea stated that they may nationalize strategic infrastructure facilities located on the peninsula.

If it happens, the radio frequencies could be set for an auction again, Investcafe analyst Timur Nigmatulin told PRIME. “In this case, mobile operator MegaFon, which has not thus far had mobile assets in Ukraine, could take part in this auction to receive part of the radio frequency spectrum in Crimea,” Nigmatullin said.

If MegaFon decides to enter the market of Crimea, it could take from 12 to 18 months to install equipment and roll out mobile networks in the peninsula, Gazprombank analyst Sergei Vasin told PRIME.

MTS and VimpelŃom Ltd. already have base stations in Crimea, so operations of these companies in the peninsula is less dependent on technical problems, Vasin said. However, the legality of the accession of Crimea to Russia is still doubtful for the majority of Western countries, which may damage the reputation of these public companies which are traded in New York, Vasin also said.

In addition, mobile companies are unlikely to significantly benefit from operations in Crimea, Vasin said. He said that according to estimates provided by VimpelCom Ltd., the revenue received from Crimea accounted for just about 1% of the company’s total revenue from Ukrainian business. “The population of Crimea is just about 2 million people, which is an insignificant contribution to a subscriber base of any of Russia’s large mobile operators,” he said.

Tensions with the Ukrainian authorities increase geopolitical risks in Crimea, Nigmatullin from Investcafe said. “For example, VimpelCom Ltd. wrote off U.S. $2.1 billion of its assets in Ukraine in 2013 due to the political and economic crisis erupted in the country, which has a strong negative impact on Ukraine’s economy,” Nigmatullin said.

In its statement, VimpelCom Ltd. attributed the write-off to the discouraging dynamic of macroeconomic indicators in Ukraine, higher business risks, and weakening operating results, Nigmatullin said.

The Ukrainian authorities believe that the March 16 referendum, at which citizens of Crimea voted for accession to Russia, was invalid. “Kiev could impose sanctions on MTS Ukraine and Kyivstar, if Russia’ MTS and VimpelCom start operations in Crimea,” Nigmatullin said.

Nigmatullin said he does not rule out that MTS will also have to write off some of its Ukrainian assets in the January–March report.

Crimea’s communications mainlines that are mainly owned by Ukrtelecom could be set for an auction, and Rostelecom is regarded as the likeliest buyer of these mainlines; but the question is under which principles this purchase could be fulfilled, Nigmatullin said.

“My view on this deal is moderately negative, as Rostelecom is a public company and the purchase of these doubtful assets could adversely affect its reputation, especially given the fact that Rostelecom has started final preparations for its privatization,” Nigmatullin said.

He also noted that neither Kiev nor most Western countries have recognized Crimea as a part of Russia, and it is difficult to predict, how Rostelecom will include the assets in Crimea into its financial reports. “Therefore, I do not believe that Rostelecom will purchase fixed-line infrastructure in Crimea in the foreseeable future. But the deal could take place after Rostelecom’s privatization,” he said.

Ukrtelecom’s infrastructure in Crimea are likely to be disconnected from channels located on the mainland part of Ukraine, and the new owner of the fixed-line infrastructure will have to lay new channels from communications hubs in Russia, Vasin from Gazprombank said, adding that the project will unlikely require investments of more than around 40 million rubles.

However, even regardless of the aforementioned risks, Crimea could hardly be characterized as an attractive region for the wireline business due to lower income of the local customers, Nigmatullin from Investcafe said.